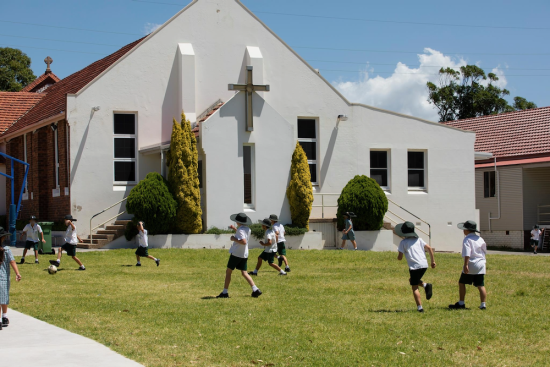 St Patrick’s Catholic Primary School, Port Kembla has serviced the educational needs of the community of Port Kembla for over nine decades. Archives show that the foundation stone of the original church/school was blessed in October 1918. Throughout the period of operation, St Patrick’s has maintained a commitment to the delivery of a primary schooling experience in the best Catholic tradition.

Currently a single-streamed primary school, the school has an enrolment of approximately 180 students spread in class cohorts from Kindergarten to Year 6. The majority of students are third-generation Australian, come from diverse social-economic backgrounds and from a large feeder area encompassing nine suburbs.

In 2017, we saw the completion of a new school housing Kindergarten to Year 6. These modern facilities allow for more innovative teaching and learning. A large break-out space connects the seven classrooms and is an area for small group learning and teaching. Refurbishment of the office facilities were also completed early in 2018. The school and office were officially blessed on 1 November 2018 by Bishop Brian Mascord.

Read more about What We Offer at St Patrick's and Take a Virtual Tour of our school.

A Catholic School in the Diocese of Wollongong

Catholic schools have a long and proud history in the Australian educational landscape. Originally established by orders of brothers, nuns and priests in the nineteenth century, they are now almost entirely staffed and led by lay people.

Catholic systemic schools in the Diocese of Wollongong are either parish primary schools like St Patrick's, or diocesan secondary or K-12 schools. They are all co-educational schools. (The Diocese also has another seven independent congregational secondary schools, some of which offer single-sex education.)

Catholic schools have a unique character because as well as being places where learning is highly valued, they are places where priority is given to a values-based education in the Catholic faith. This involves all staff and students proclaiming the Good News of Jesus Christ to the world. Staff identify strongly with their school and take pride in their work and the school’s achievements.

Take a Virtual Tour of Our School

What We Offer at St Patrick's